I was just surfing the TCM (Turner Classic Movies) website to see what will be on tonight and I came across 3 great movies:

This is a fantastic epic and if you have never seen this great film it is a must. It has an all star cast and great direction thanks to Kubrick.

This is a 1960 American epic historical drama film directed by Stanley Kubrick and based on the novel of the same name by Howard Fast. The life story of the historical figure Spartacus and the events of the Third Servile War were adapted by Dalton Trumboas a screenplay. 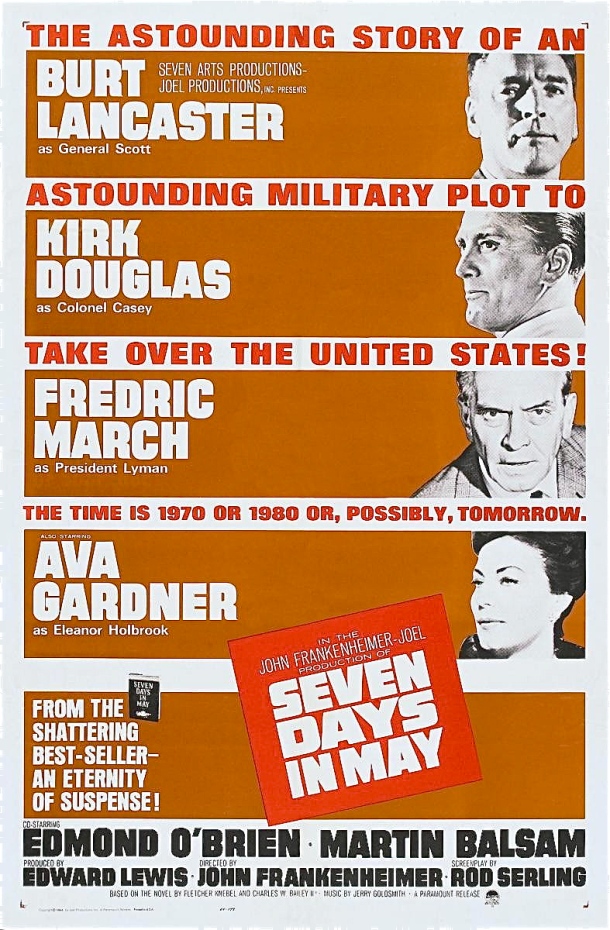 This is another great movie. It is about an American military officer discovering his superiors are planning a military coup that will take over the U.S. and deem the sitting president incompetent.

Seven Days in May is an American political thriller novel written by Fletcher Knebel and Charles W. Bailey II and published in 1962. It was made into a motion picture and released in February 1964, with a screenplay by Rod Serling, directed by John Frankenheimer, and starring Burt Lancaster, Kirk Douglas, Fredric March, and Ava Gardner.

The Way West is a 1967 American epic western film based on the novel by A. B. Guthrie, Jr.. The film stars Kirk Douglas, Robert Mitchum, and Richard Widmark, and features Sally Field in her first major film role. The film was directed by veteran television director Andrew V. McLaglen and featured on-location cinematography by William H. Clothier. Roger Ebert praised the film for its realistic portrayal of settlers and their motivations.