For some unknown reason Flamingo’s have had a special place in 50’s decor. Maybe the love affair started earlier though, maybe when all those young Americans were stationed in the tropics during World War II. I have yet to incorporate flamingos into our decor but it isn’t from lack of trying. Every once in a while I come across some  flamingo figurines and just when I go to grab them I look at the price and Dang! I guess they are still in demand. During the 50’s Flamingos seemed to be all over. I think the draw also came from the pink color that was big during that time. Anyways, here are some items I would love to get my hands on… 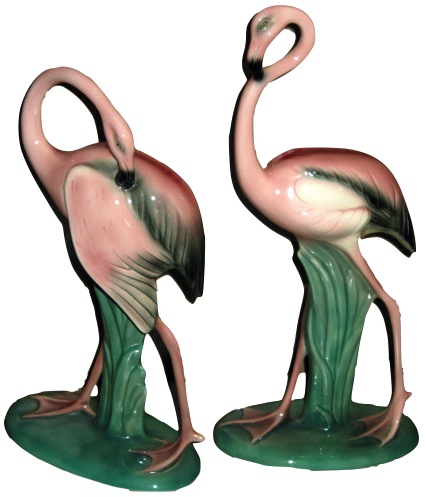 William and George Climes founded The Will-George Company in 1934 in William’s Los Angeles garage. The brothers manufactured an extensive line of quality art pottery made of porcelain and earthenware, including very popular bird and animal figurines. They eventually moved to a larger facility in Pasadena, California, and became a recognized member of the California Pottery community. Various stories floating around on the web claim that these flamingos were produced for the grand opening of the Flamingo Hotel in Las Vegas. They were supposedly given as gifts, and that the number Will-George produced ranges from as high as 1000 to only 200 sets. 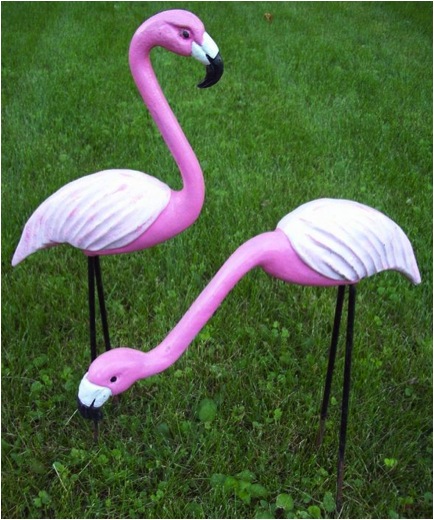 No item is as iconic of the kitschier side of the 1950’s and 60’s than the pink flamingo.  The 3-D pink flamingo as “yard art” was born in 1957 (great year!) and it’s design is attributed to Donald Featherstone, an American artist working for Union Products at the time.  It went on sale in 1958, when the craze for everything pink was at its height.  In 1996, Featherstone was awarded the 1996 Ig Nobel Art Prize for his creation of the Pink Flamingo.

I plan to get one of these soon. They go soo well in a Tiki setting.

Posted in Nostalgia. Bookmark the permalink.
← Previous Post
Another Fine Day Of Pickin’! →