Jack Lane and the Brown Derby 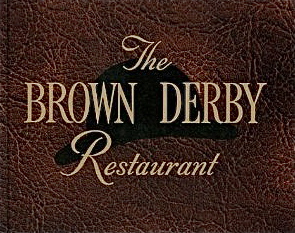 I wish I had been around to visit the Brown Derby (there is a replica at Hollywood Studios park at Walt Disney World) to try their famous Cobb salad and to see the equally famous caricatures drawn by Jack Lane. Being someone who enjoys drawing I can appreciate his talent, but I am sure I am not alone. It is not easy to draw caricatures because you requires you to look at someone and distinguish their most obvious features and embellish them while making it still look like them. If there was a master it was Jack Lane and he drew all of Hollywood’s famous celebrities. Jack Lane provided caricatures to the Brown Derby from 1947 to 1985. He even wrote a book called, A Gallery of Stars: The Story of the Hollywood Brown Derby Wall of Fame, describing his many years as the resident caricaturist there. There was a classic episode of “I love Lucy” (click to watch clip) with William Holden that took place at the Brown Derby where you can see a lot of Mr.Lanes work in the background.

Here is just a small sampling of his work. 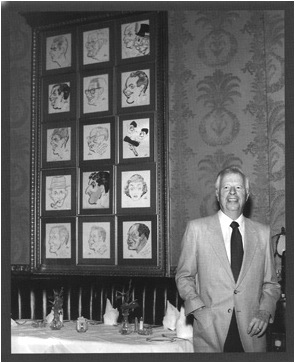 Here is Mr.Lane showing his work at the Brown Derby.

Posted in Nostalgia. Bookmark the permalink.
← Sam The Sham & The Pharaohs
1941 The Wolf Man on TCM →