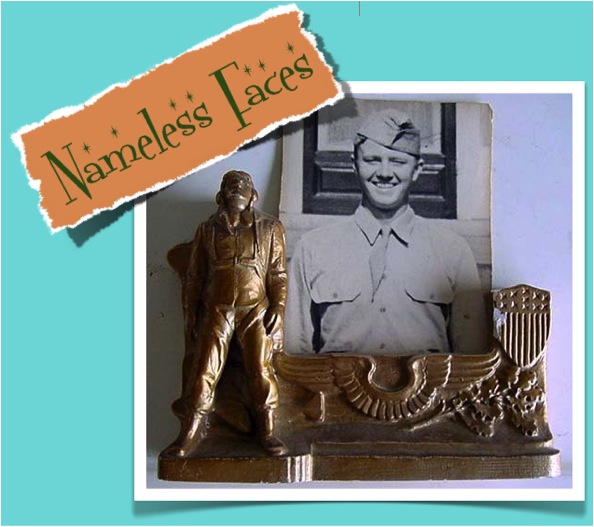 I have purchased numerous items that have old pictures in them and it always makes me wonder who these people are. When I purchased this item off of Ebay it actually made me a little sad when I saw the photo of a military member not claimed by his family. This was obviously WWII, and it appears he is in the  Army Air Corps……I think. I originally purchased this frame because I wanted it to sit on top of our new Heywood Wakefield dresser. I had planned to put one of my military photos in it but I can’t bear to remove this photo now that I have seen it. What if this is the only thing left to remember this guy and the sacrifices he might have made? So many of the young men from WWII never made it home. This is why I will not change out this young mans photo. This frame was made in 1942 by E.C.A. Unfortunately I can not find any info on E.C.A. to pass along to you guys. I know they made other pieces because I found this one from an old Ebay auction. 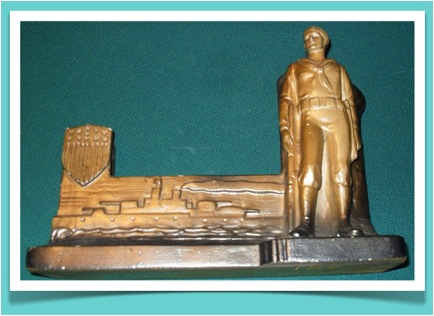 This one appears to be a patriotic Navy scene.

Anyways, when I got this frame it did have a few dings and chips but nothing major. I used the usual process to repair it with spackle and new paint.

Here a few of the dings and chips. There were also a few on the front.

After I filled all the dings and chips with spackle and sanded it into form, I then repainted the whole piece. I think it looks good as new and I think this unknown soldier will be given the respect he deserves.

This little statuette looks soo cool with his flight gear. Plus you can see the bomber in the background.

So next time you find yourself with an old photo of a stranger think about them and if you have room to add them to your family. I know there are people who collect old photos so I am sure they can relate to how I feel.