We were at Midway Antique Mall stocking our shop when I ran into Justin from Stellar Electronics. I asked him about a cream colored table top television that I had seen in his shop for some time. I told him we needed a small television for the kitchen and that would work. Justin said he had no real plans for it, so I took it home.

This cabinet was in pretty sad shape. It had a lot of dings and scrapes. I was assuming from what I could see that I would have to re-veneer it or paint it to salvage the cabinet.

I started sanding through the paint to discover between the paint and the wood was old polyurethane. I was thankful for this because the polyurethane prevented the paint from getting into the grain of the wood. I was also pleasantly surprised to see the condition of the wood beneath all the crud.

The overall condition of the veneer is remarkable for being just over 63 years old. Though it is not perfect, I would say after sanding it is pretty darn clean! 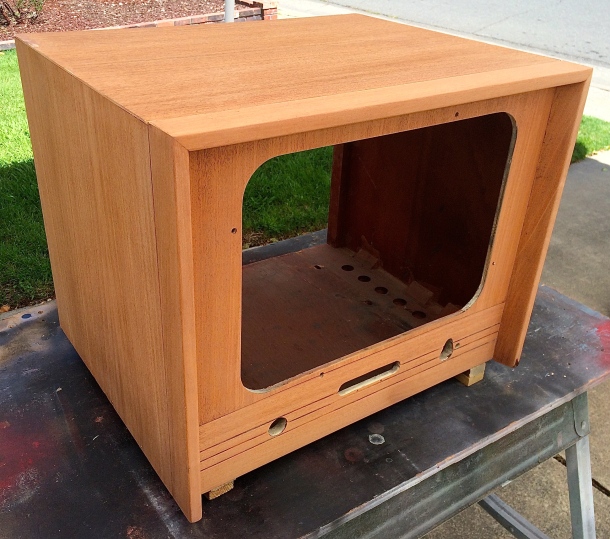 After a few hours of sanding and stripping, I got the whole cabinet down to bare wood. I am completely surprised with how nice the cabinet is.

I applied two even coats of a walnut stain. I plan to polyurethane the whole thing, but that will be tomorrow. I want the stain to soak in well and be completely dry when I spray it.

To up it’s atomic appeal, I have this hairpin swivel base that I plan to mount the television on. I still need to clean up the legs and grease the bearings.

Here we have the surround and the control panel cover. They are in well used condition, but thats nothing a little spray paint can’t help.

Just cooking in the sun! 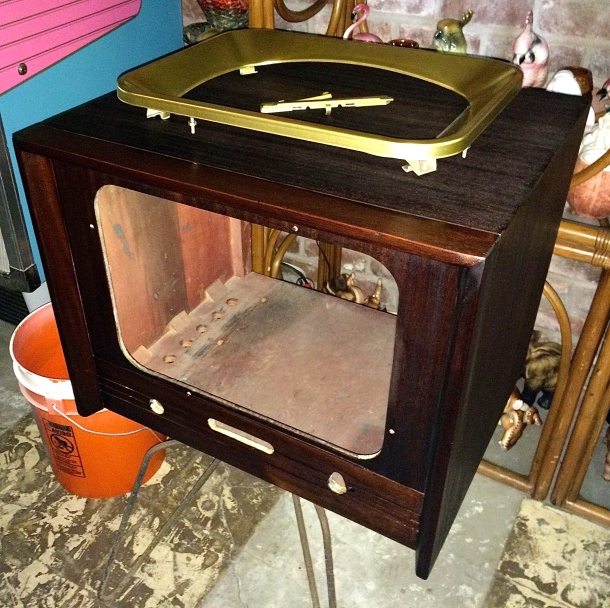 Well, that was enough for one day. This will be a multi-part posting. I plan to polyurethane it tomorrow and restore the hairpin legs. I will more than likely have to reinforce the bottom since these legs will be holding the weight of the television. After that is done, it is off to Justin’s for it’s conversion!