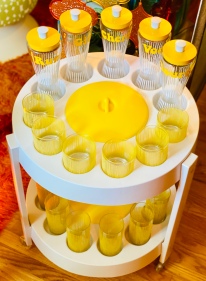 At one point Mel and I had a house in Sacramento and an apartment in San Jose. This was required because of Mel’s work. It was just easier for Mel to stay in San Jose during the week for work, and then come home to Sacramento during the weekends. As somebody who loves to decorate, I saw her apartment as an opportunity to decorate in space-age decor.  When we decided to go “all in” in the bay area and buy a house, we didn’t want to get rid of all the space-age furniture. We ended up deciding to devote one of our rooms in our house to 70’s space-age. 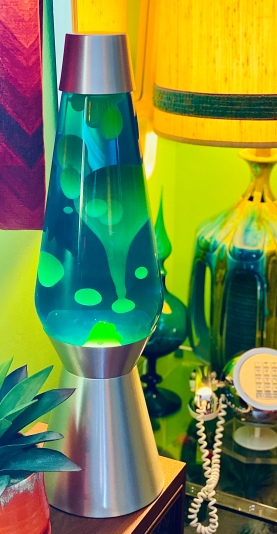 I would of loved to have been able to find some super large vintage lava lamps but I don’t trust them.

These two really large lava lamps were purchased online from Wal*Mart.
While I really do enjoy decorating with atomic Mid Century decor, it’s nice to explore a different genre. Decorating in a different style can really get your creative juices flowing.

We purchased two of these lava glaze lamps at an antique shop up in Paradise CA.

I’m not sure if that shop is still around after the major fire they had up there. 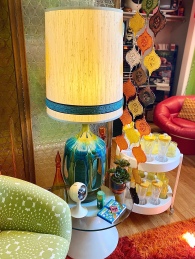 We would hit Paradise all the time when we were on the hunt for cool stuff. I hope they come back from that tragedy.
The real issue was going from decorating a full apartment to decorating just one room. It came down to a battle for space. We had so many cool pieces in her apartment, but they coudn’t all fit in one room. We tried to keep the coolest items from that collection.

I am big into music. I wanted to create a room to hang out in and listen to records and cassettes. I think I’m one of the few out there who are still listening to their cassette tapes. LOL! I remember the first cassette I ever bought was the “Black Celebration” album by Depeche Mode. I was raised on 80s music, but listen to everything! This is our wall of cassettes! I also use this wall to display some choice records. 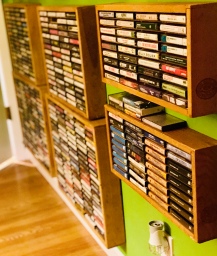 We were able to keep Mel’s Seeburg Olympian 160 jukebox. Because I was a kid raised in the 80s, we loaded this sucker up with all 80s music! Since space is an issue, I took the closet doors off and created a cove for the jukebox. I also had an electrician come out and wire an outlet into the closet so I didn’t have extension cords hanging out. 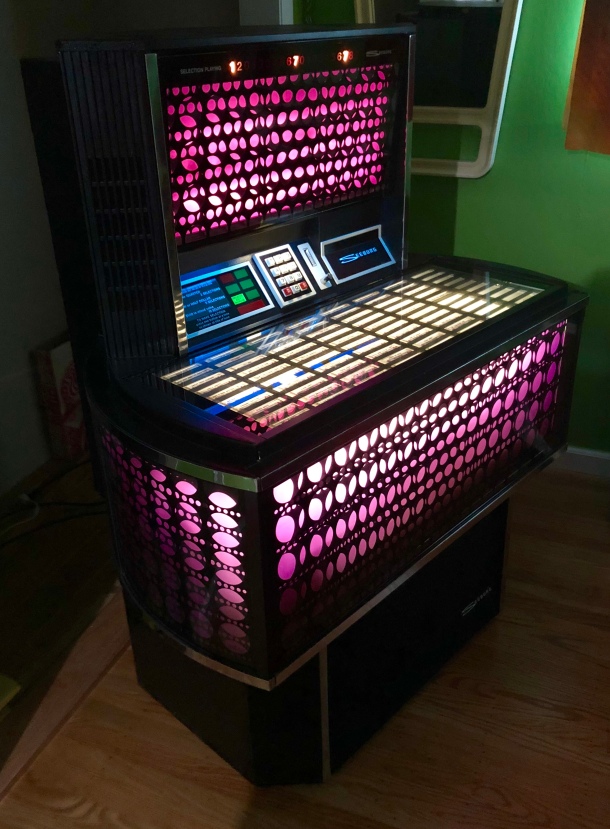 We have a few space-age radios and TVs, and the shelves in the closet above the jukebox are great for displaying those.

You might remember this Chromcraft couch, chair and ottoman set. We blogged about them a while back after we had them reupholstered. 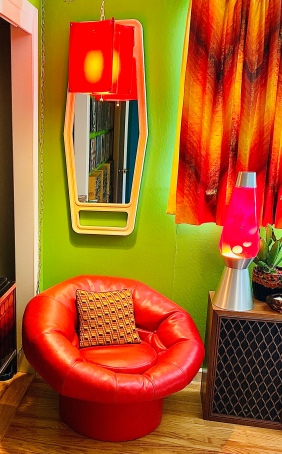 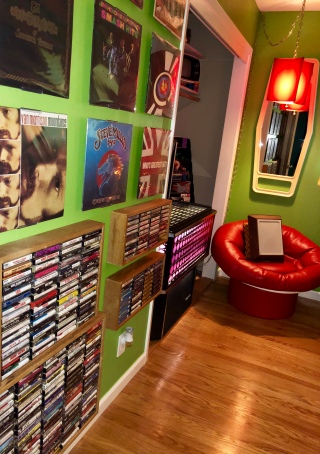 I’m not sure who the maker of this red chair is, but we also had this one reupholstered. It is so comfortable to sit on. 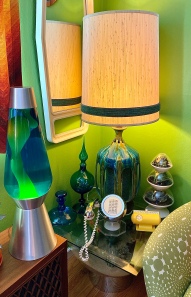 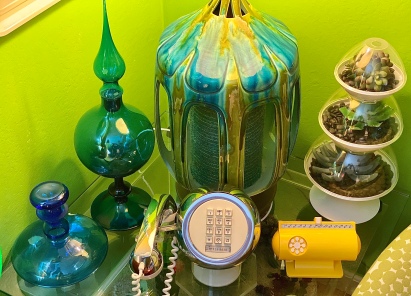 This corner table is really unique. We came across it at an antique mall, and I knew it would be a great addition to the space-age decor. The bottom is a terrarium and I was able to put some of my favorite artificial cacti in there. 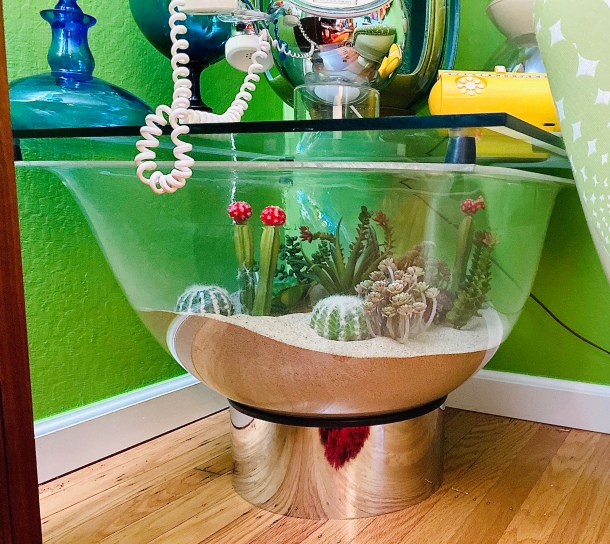 I suppose this table could also have been used as an aquarium. I’m not sure if that would work, but it might be a cool idea.

These vintage concert posters are all original prints. We purchased them from a dealer at Midway Antique Mall. The story behind them is that an elderly lady living in the bay area back in the 60s would see these posters on telephone poles and light poles. She would take them down and save them not really knowing that they’d be worth so much later. Anyway, the house she lived in was being demolished and I’m assuming she had passed away or moved on. A couple of observant ladies were walking by the dumpster that was being used and noticed a bunch of papers rolled up. Since they were being thrown away, they grab them. When they got home it was a massive collection of original concert posters from that era. They went to Midway Antique Mall and sold quite a few of them to that dealer. One man’s junk is another man’s treasure!