I have been a fan of Jim Reeves since the first time I had the pleasure of hearing him sing. He is considered the practitioner of the Nashville sound. To me, he will always be known as THE cowboy crooner. He was easily able to write songs that bridged the gap between older country style music and popular music of his time. Jim’s singing voice was that of a rich light baritone. Songs such as “Adios Amigo”, “Welcome to My World”, and “Am I Losing You?” demonstrated this.

Reeves’ first successful country music songs included “I Love You” (a duet with Ginny Wright), “Mexican Joe”, and “Bimbo” which reached Number 1 in 1954 on the U.S. Country Charts, and other songs with both Fabor Records and Abbott Records. Abbott released his first album in November 1955, Jim Reeves Sings (Abbott 5001), which was the label’s only album release. Earlier in 1955, he was signed to a 10-year recording contract with RCA Victor by Steve Sholes, who produced some of Reeves’ first recordings at RCA and signed Elvis Presley for the company that same year. Also in 1955, he joined the Grand Ole Opry[2] and made his first appearance on ABC-TV’s Ozark Jubilee, where he was a fill-in host from May–July 1958.

By the 60’s, Jim had international fame. He toured in Africa, Norway, Ireland and Britain. Reeves had many fans all over the world including both India and Sri Lanka, and is probably the all-time most popular English language singer in Sri Lanka. His Christmas carols are especially popular, and music stores continue to carry his music. Two of his songs, “There’s a Heartache Following Me” and “Welcome to My World,” were favorites of the Indian spiritual teacher Meher Baba. A follower of Meher Baba, Pete Townshend of the Who, recorded his own version of “Heartache” on his first major solo album Who Came First during 1972. During Christmas season his versions of “Jingle Bells”, Silent Night” or “Mary’s Boy Child” are the most sought after songs/albums in Sri Lanka. 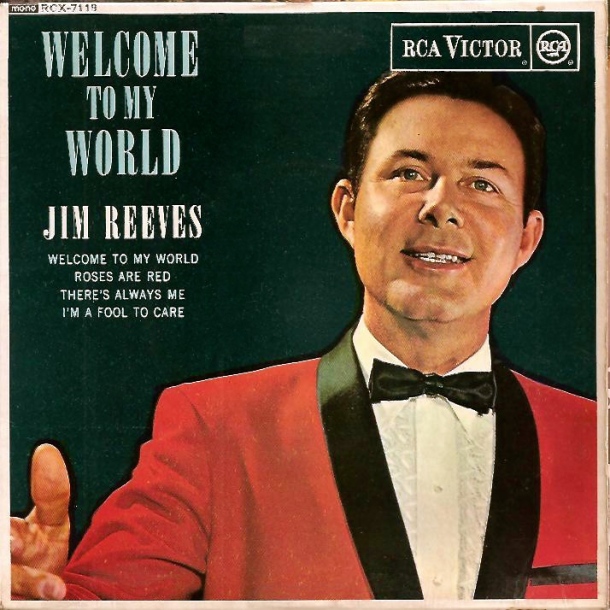 Robert Svoboda, in his trilogy on Aghora and the Aghori Vimalananda, mentions that Vimalananda considered Reeves a gandharva, i.e. in Indian tradition, a heavenly musician, who had been born on Earth. He had Svoboda play Reeves’ “Take My Hand, Precious Lord” at his cremation. 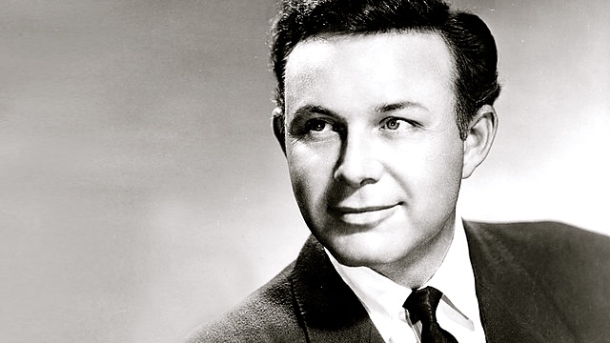 There are many songs that he sang, here are a few of his most popular:

He’ll Have To Go

Here he is in 1956 on Country Music Classics with Ray Price and Jim Reeves:

Here is a 3 parts of a four part documentary on Gentleman Jim. Unfortunately part 2 in not on file:

On July 31, 1964, Reeves and his business partner and manager Dean Manuel left Batesville, Arkansas, en route to Nashville in a single-engine Beechcraft Debonair aircraft, with Reeves at the controls. The plane never arrived. It was later discovered that maybe Jim had not had enough training to fly in the bad weather they encountered. Coincidentally, both Reeves and Randy Hughes, the pilot of Patsy Cline’s ill-fated airplane, were trained by the same instructor. 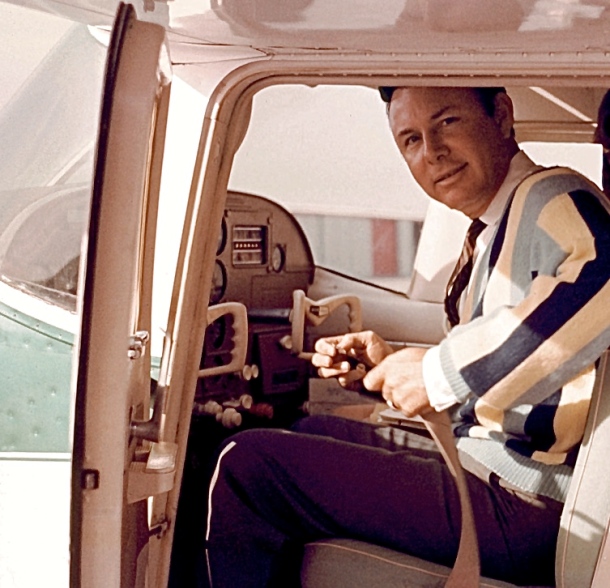 Reeves was elected posthumously to the Country Music Hall of Fame during 1967, which honored him by saying, “The velvet style of ‘Gentleman Jim Reeves’ was an international influence. His rich voice brought millions of new fans to country music from every corner of the world. Although the crash of his private airplane took his life, posterity will keep his name alive because they will remember him as one of country music’s most important performers.”

During 1998, he was inducted into the Texas Country Music Hall of Fame in Carthage, Texas, where the Jim Reeves Memorial is located. The inscription on the memorial reads, “If I, a lowly singer, dry one tear, or soothe one humble human heart in pain, then my homely verse to God is dear, and not one stanza has been sung in vain.” 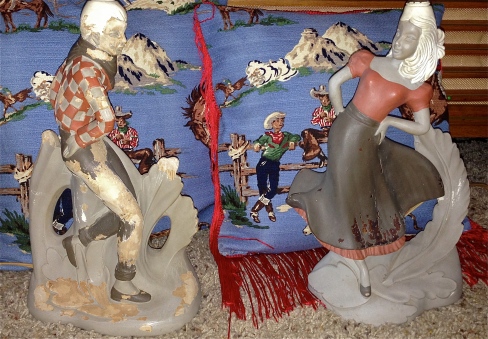 Mel and I were up in Sebastopol California having a look around when we came across these small lamps at FFT Antiques (All sales benefit Food For Thought, Sonoma County AIDS Food Bank). I love them! Mel….not soo much. I know they are going to need a big resto but I am up to it. It is sooo hard to find western things from the 40’s and 50’s. Most of it was destroyed from use. I love this square dancing duo. Unfortunately, I was unable to find a makers mark. 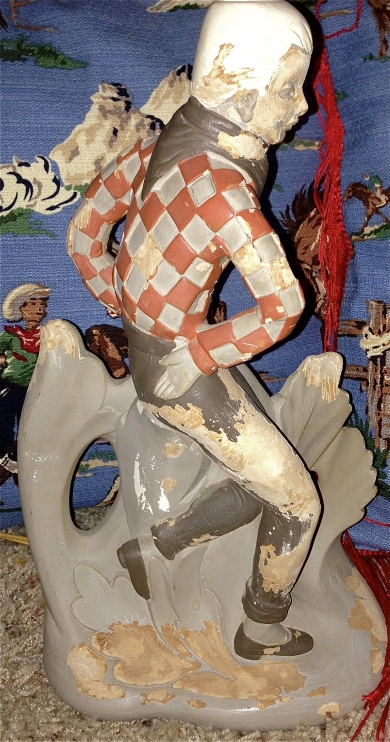 As you can see the paint is chipping off in chunks. The first thing I will have to do is remove all the loose paint, then fill any areas that require fill, then sand and paint. Also, if he is a cowboy why is he wearing loafers??? These will be boots when I am done.

These lamps have been used and abused so the transformation should be pretty remarkable. These lamps even have their original finials. 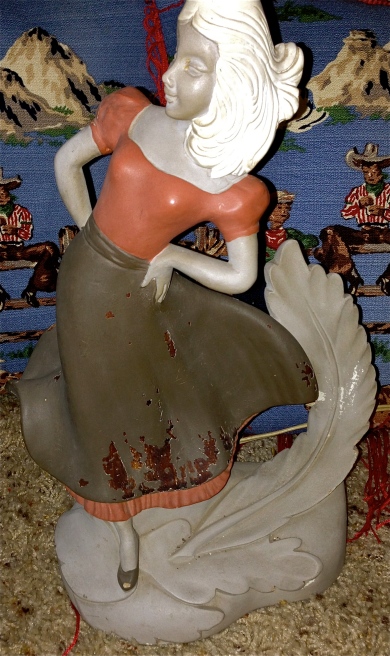 As you can see someone tried to touch up her dress but it doesn’t look like they were very successful with the attempt.

We were fortunate to get the original shades with the lamps. One is darker than the other so I plan to recover them and re-stencil the image on the new material. I just need to figure out where I can get replacement material from. 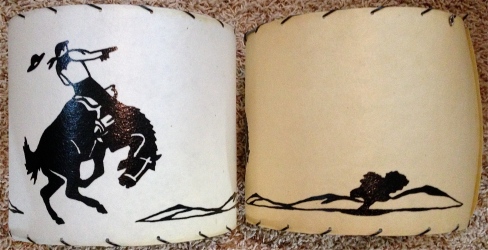 While we were out we came across these really cool pillows. I love the fringe on the one and the imagery on both. I am going to have to reach out to Debbie over at “The Creative Needle” to install zippers on these and install fringe on the other pillow.